Wishing you & yours the best at this time. 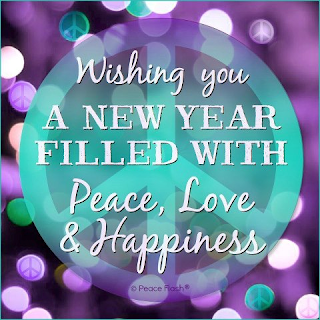 May you all have "Safe Journeys" in all you do in the New Year.

Posted by Tosty's Quilting Tidbits at 7:55 PM No comments:

Here is part 5 all done. I worked on it today while watching Bonnie on Quilt Cam. I have gotten soooo much done since Quilt Cam was started. Most of the time I work on my hand embroidery. I have been working on a piece called "Frog Work" and I know I would be nowhere near where I am now on it, if it wasn't for Bonnie. I only have one more block to embroider and then make the pieced blocks and assemble.
Here's the linky. http://quiltville.blogspot.com/2012/12/mystery-monday-link-up-part-5.html 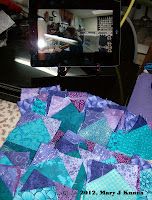 I am also making some kind of progress working on cleaning up the "Black Hole".  There's still a long way to go to get it where I really want it, but I'll be happy just to get it workable so my little group that meets once a month will be able to fit in and sew comfortably.

Wishing everyone a Merry Christmas. Well I've spent the last 2 days playing hooky from the sewing room (aka Black Hole). A friend came over the other day and twisted my arm to go do some antiquing. We started out by making a quick stop so I could pick up a couple more stocking stuffers, then it was onward and forward.

We made our first stop at Pacific Run Antique Mall and I found a couple of items of interest. I was good and they stayed right there. The first was just an unfinished top. It did have some seams that were coming undone, but nothing that couldn't be fixed. The second was in really good condition. 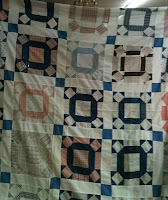 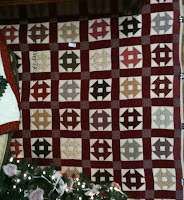 From there we went to another small little shop and I found this one. (Note: The pic is a little blurry--what can I say?) It was in good shape but they wanted more than I wanted to pay. 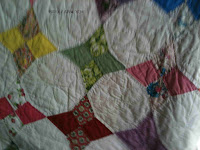 Today I have done absolutely nothing but read a little bit and watch the birds outside hit the feeders.
We had a nice little bit of snow last night and that just made me want to be on the lazy side.

Tomorrow it is back to work as I am trying to clean up the Black Hole and jettison some stuff to make things more workable.

Well I had a good day today. I spent the greater part of the day cutting and piecing on Easy Street.
I have Part 4 complete (even the 3 1/2" green squares). Then I pieced a backing for one of MY quilts. Imagine that! I may actually get to quilt one of my own quilts this next week.

I usually try to take the month of January off for quilting client quilts, but I don't think that will be the case this year. I already have them coming in by 2's. Oh well, staying busy like that will keep me off the streets and out of bars :-). 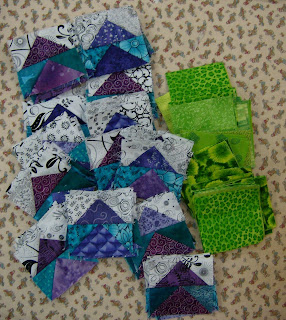 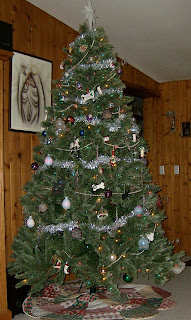 Mary
Posted by Tosty's Quilting Tidbits at 5:24 PM No comments:

Well this part was seeeeeew easy to do. Since I had "slightly" over cut the sky pieces last week, I had enough to do this weeks part. Sew I didn't have too much cutting to do. Here's my Part 3. Here's the linky to Bonnie.
http://quiltville.blogspot.com/2012/12/mystery-monday-link-up-part-3.html 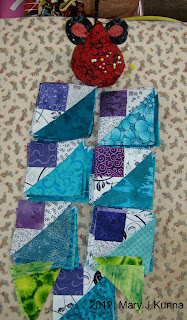 I also finished the last item that was ordered by a customer. It is a beaded needlecase. I am sending it out tomorrow. I will be out at my LQS tomorrow for the Farmer's Wife Club. I finished the blocks for that today while watching Bonnie.
Here's a pic of the needlecase. 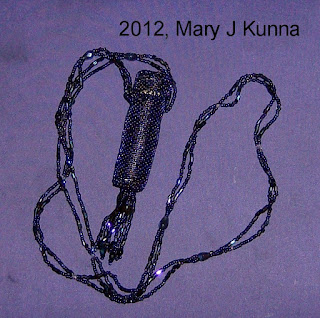 Just delivered  the last of the Christmas quilts for my clients. Now I can relax. Possibly get some of my tops done this next week if I can get all the Christmas decs. up. Here's the last 2 quilts. 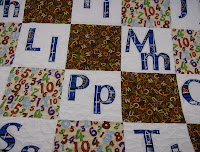 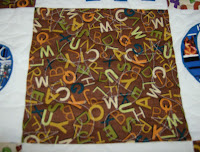 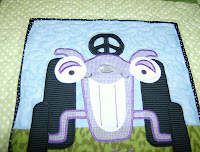 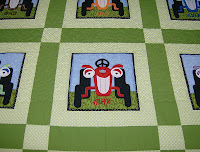 Aren't these cute?!
I also managed to make some new smaller stockings for us. I thought we really didn't need humongo stockings that we never filled. So I made these. 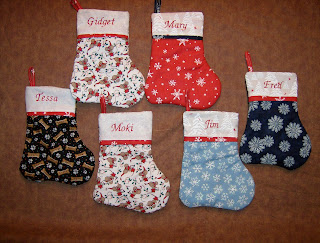 There is one for me, one for DH, one for DS and then for each of our furry little kids (2 cats, 1 dog).
I feel like I got a lot accomplished today.
Tomorrow----Part 3 Easy Street. YAY!!!!!!!
Hugs & Stitches,
Mary
Posted by Tosty's Quilting Tidbits at 7:52 PM No comments:

I finished Part 2 today. I have a little confession to make. When cutting the sky parts, I layered as Bonnie showed in video and proceeded to cut. Now, there were 128 geese parts and we needed 256 sky units, (Do you know where this is going?) I keep count while cutting, and proceeded to cut 256--
PAIRS!! I now have extra sky units to make another 128 geese. Oh well--as the saying goes--I stopped to think and forgot to start again. Here's the linky to Bonnie's Part 2.
http://quiltville.blogspot.com/2012/12/mystery-monday-link-up-part-2.html 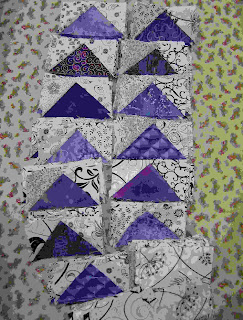 I also got another client quilt done (this leaves only 2 more to get out for Christmas delivery).
You may have a little difficult time seeing the quilting on this one because I used------wait for it----
wait for it--------Invisible thread---to quilt it. (I'm just so funny :-)  ). 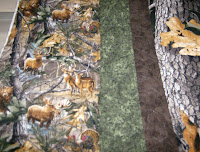 I also got one of my last 2 quilts loaded and ready to go (quilt) on Tuesday. I will be out at my LQS all day tomorrow for our BOM.

That's all for now.
Til next time,
Hugs & Stitches,
Mary
Posted by Tosty's Quilting Tidbits at 6:07 PM 3 comments: