Well have I been negligent in writing. Bad girl!

It has been a spring and summer of BUSY. Where do I start.

Let start with the car resto. Still don't have it in my possession. The "mechanic" that was doing the wiring just had too many excuses as to why he couldn't get it together. the car is sooo close to being done and I felt I was just getting jacked around. It finally came to a head last week. I ended up filing a complaint with the Attorney General and talked to an attorney (firm specializes in classic car litigation), Went back down to the Autobody shop this last Monday and I think we have it straightened out. The "mechanic" is no longer working there. He realized S**t  was going to hit the fan and quit. I have a signed paper stating as to when the car will be done (August 9th) and if it isn't since I have the paper I will persue a breach of contract.
Here are some pics with it painted. Since then we have chrome back on and other stuff done like the upholstery. I will post those as soon as I transfer them to my files from the phone. 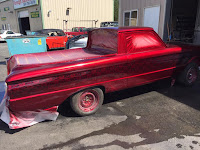 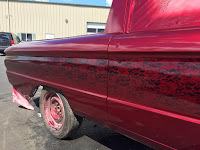 Let's see, what else. It's been since March for my last post. I have been to 2 quilt retreats.
The first one is the one I always teach at. This year I taught the Necessary Wallet Clutch. It went pretty well. Here is a pic of the wallet I taught. 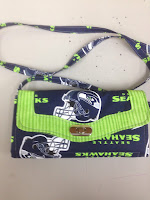 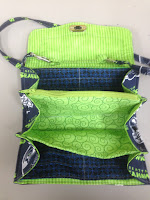 At the other retreat that I did in Idaho I had a little project that we worked on. Took all of about 15 minutes. I think everyone enjoyed them. 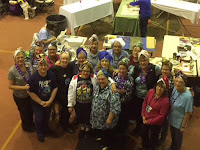 This pic is not at Idaho. It is the April one. I didn't  get pics in Idaho. This is the project. Head wraps for after shower. I did it as a little mystery and when I reveled it I said "now we will channel our inner Carmen Miranda."  One of the younger gals sitting next to my friend leaned over and said, "Who is Carmen Miranda?"  LOL

Of course my BQB and I are furiously working on inventory for the quilt shows. We have 2 coming up here shortly. One in September and one in October. One is in Ocean Shores and the other is in Longview.

She had also been coming to our Thursday sew day. We haven't accomplished much in the way of our UFO list.  Although she has finished putting together her Vintage Tin. Now I get to quilt it.

I manage to finish up the Skull quilt that I was making for me. The problem is it sort of grew too big. When I posted a pic on FB my nephew saw it and wanted to know if it was for him. Guess what? It now reside with him. 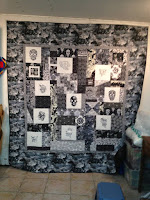 I have also made a class sample for the new BOM starting next month at the LQS where I teach.

This is my newest endeavor. 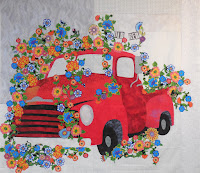 That was a lot of fun.

On the health front. I'm fine. But it has been a little stressful because it seems that several of my friends have had something going on. Either them or their spouses. One friend lost her husband to cancer. Three others have either had a re-occurrence of cancer or have been diagnosed. BQB almost lost her DH in a ditch cave in. My DH had a fight with a chop saw, and the chop saw won. It wasn't too, too serious. He took a bite out of the tip of his finger. It was enough that he had to have a graft.
There are others, but I don't want to be a downer.

I sent a quilt off to a niece. 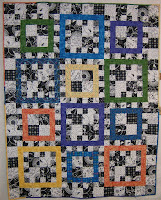 Then I made one for her fur baby. 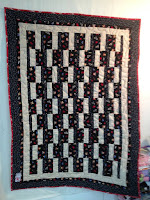 Then I sent one to my other niece (her sister), 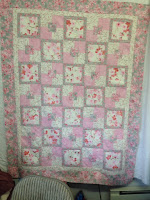 I have played some in the garden this summer also. 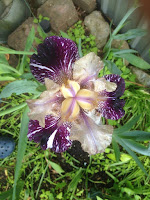 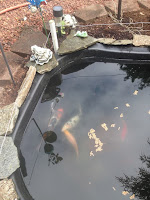 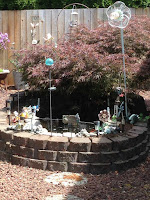 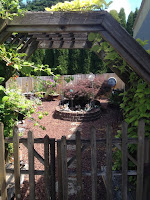 That's about it for this post.  I need to get a quilt loaded and quilted. Gotta keep up with the quilting for clients before I get bogged down again.

Til later,
Hugs & Stitches,
Mary
Posted by Tosty's Quilting Tidbits at 9:28 AM No comments: