Well I've joined this sort of late to report January's finish so I'll start in February. This is from Patchwork Times by  Judy L.
This is what I would like to accomplish for this month.
1. Quilt & Bind Dragonfly 5 yd. quilt.
2. Quilt and Bind purple floral BQ quilt.
3. Make 5 Reach for a Cure Totes
4. Finish Easy Street top.
We'll see how well I do. I'll post pics of finishes.
Til later,
Hugs & Stitches
Mary
Posted by Tosty's Quilting Tidbits at 8:27 PM 3 comments: 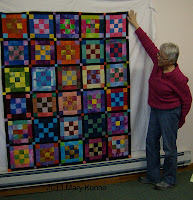 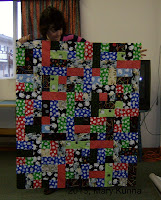 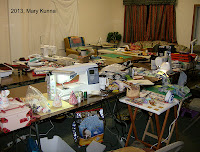 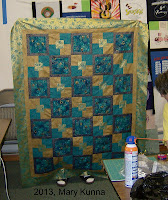 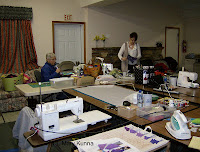 It was a very productive weekend for all of us.

That's it for now.
Til later
Hugs & Stitches,
Mary
Posted by Tosty's Quilting Tidbits at 8:09 PM No comments:

Well retreat was WONDERFUL!!!!!
Lots of sewing done. I started out working on making "Star Struck". Got the top finished so now it just needs to be quilted and bound. 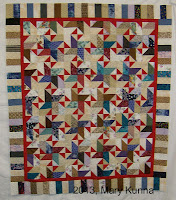 Then I started on finishing up "Easy Street". However, I ran into a glitch. When I went to make the B block, I found I was 24 green squares short, and I didn't take extra fabrics. SOOOOOO--I'm about 3/4 of the way through putting the top together. Unfortunately I forgot to get pics of it. 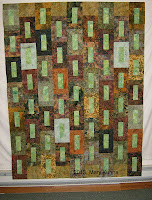 After that I worked a while on some of the Famer's Wife blocks that I am doing using Thimbleberries fabric. This is the extra set that I make each month to show how the blocks are put together (for the FW Club at the LQS I teach at).
Here are some more pics. of the weekend. 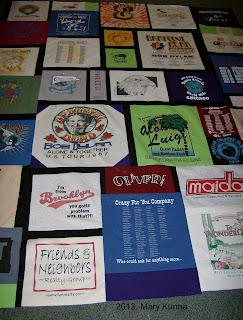 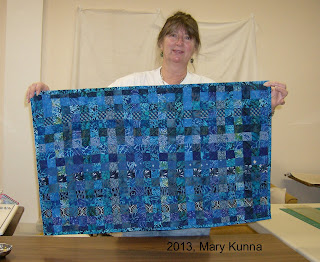 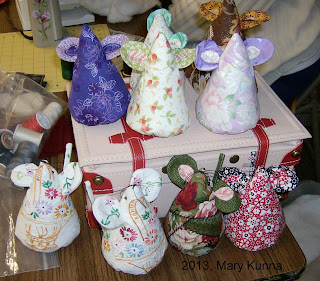 I think we had a mice problem :-)
This is a few---I'll post more tomorrow. Right now I think I need to make it an early night and go to bed. Not too much sleep last night.
Until Later,
Hugs & Stitches,
Mary

Posted by Tosty's Quilting Tidbits at 7:36 PM No comments:

A Finish at Last

I finished my project for "A Lovely Year of Finishes" for January. It is quilted,bound and labeled. 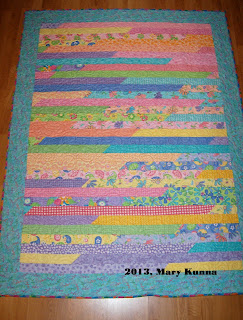 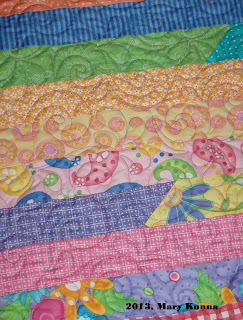 I quilted it with "Wave on Wave" from Urban Elementz, and I used a variegated thread called Fad 5.

Surprises of surprises----I guess Blogger finally fixed the glitch in posting pics. I didn't have to take the long confusing way I had been doing it lately. Hooray!!!!

Well, I'm all packed and ready to leave Friday AM for the ocean retreat. I've decided to stay until Monday instead of coming home Sunday. Just think----from Friday afternoon to Monday, just quilt, quilt and QUILT.
I'll have some pics to post when I get back.

I really got a lot accomplished today. I went down to the sewing room  aka "Black Hole" and finished up a Reach for the Cure totebag. Then I pulled fabric (out of my 2 1/2" strip boxes) and while watching Bonnie Hunter on Quilt Cam I stitched pairs together to start on a Star Struck quilt. I also cut the 120 2 1/2" light squares and the 120 2 1/2" accent squares, and cut the strips into 4 1/2" segments. All packed and ready to go to the ocean retreat this coming weekend.  After dinner I started quilting on my quilt top that I need to get done for the "Lovely Year of Finishes" that I'm doing. Then I sort of got side-tracked and started kitting more Reach for a Cure totes to do this weekend also. I kitted up 11 of them. I did a rough estimate, and figured I took care of approximately 21 yds of fabric. Woo Hoo!!!!! That's a pretty good dent in the ole Stash!!!
Well that's it for today.
Till the next time-
Hugs & Stitches,
Mary
Posted by Tosty's Quilting Tidbits at 8:27 PM 1 comment:

Well I'm sort of in between projects right now. I've spent the time since I finished the BOM quilt, cleaning, cleaning and cleaning. I still don't have the sewing room quite ready, but I was able to fit my little group of 6 (plus me) in so we could sew. Tomorrow I'm going to try to get my 1600 quilt quilted. Then it's grocery shopping time, and then over to a friends house to meet her new little furry addition (named Mollie).

I'm also still trying to decide what I'm taking to the ocean retreat at the end of the month. This is a yearly retreat that 10-12 friends do and it is sew much fun. I just hope the weather co-operates with us.

Well I guess that's all for now. No pictures this time around. I hope the problem with adding pics is solved soon. I really am tired of taking the long way around to post pics.

Til next time,
Hugs & Stitches,
Mary
Posted by Tosty's Quilting Tidbits at 9:28 PM No comments:

I finally finished the new BOM (top only) for my LQS. I have been working on it since the beginning of the month. I had to put Easy Street Mystery on hold so I could work on this. This will start up in March. 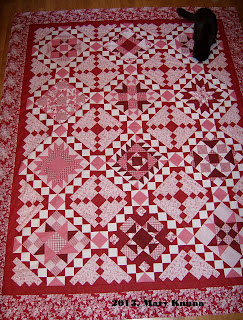 Of course, Gidget the inspector had to approve it.
Tomorrow AM I guess I'll do the next batch of Farmer's Wife Blocks that I have to have ready for Monday at LQS. No rest for the weary (or wicked).

I'm going to be going to a small retreat at the ocean at the end of this month, so I decided I would take Easy Street and finish it up there. I soooooo wanted to finish it right away, but-------what can I say.

I also have to finish a group of Postcards by the end of the month and have them sent. I guess that will be my next project to start.

I'm also still working on getting the sewing room cleaned up. That is an ongoing process. I have YEARS of accumulation to go through.

That's about it for now.
Til later,
Hugs & Stitches,
Mary
Posted by Tosty's Quilting Tidbits at 6:18 PM 1 comment:

Add This Linky Party to Your Blog 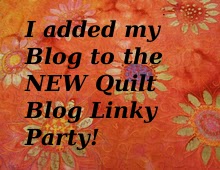 First Finish of the Year

Here's a pic of the first finish from my list.

That's Gigdet, the quilt inspector. This was a block of the month at Gee Gee's Quilting that was from, can you believe, 2003. I finally quilted it.

Here's another client quilt that I finished today.

The pics aren't the greatest cause these are from my phone. This is the only way I can post pics right now. I'm havng a problem with inserting from files as it won't bring up the "Browse" button on the insert screen.

I've also been working on the new Block of the Month for out at Gee Gee's that will start in March. It's called Saturday Soiree, and it is beautiful, but a LOT of piecing. I'm trying to get this done so we can hang it as a sample in the shop. When I have it done I will post pics.

Well I tried to be good today and get some work done.

The first pic is the WIP that I want to finish this month for "A Lovely Year of Finishes"
I started it in November of 2011. I finally got the border put on it about 2 weeks ago, and pieced the back and made the binding. All I have to do now is quilt it and sew the binding on. 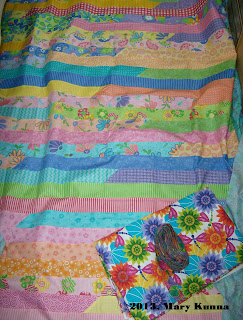 The next pic is the first 2 blocks of the Block Of the Month at the LQS (Gee Gee's Quilting)  that I am the coordinator. I got 4 blocks finished today ( I still am thinking of doing more this evening). I am trying to get the top done to show this next Monday at the shop. 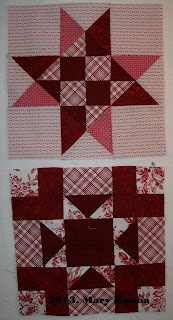 The next pic is the first client quilt done for this year. It's a 1600 quilt that I quilted with a panto called Ebb & Flow. I went out today and got this in the mail to go back to the client. 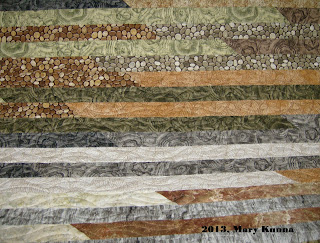 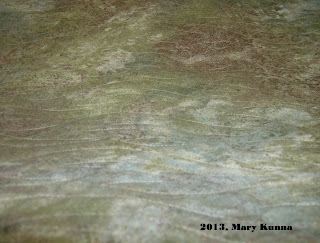 I will be working on the BOM quilt until I get the top done. Maybe then I can finish up Bonnie Hunter's Easy Street Mystery. I really want to get that one done.

Well this year, like a lot of other quilters, my goal is to finish up some UFO's. To that end I have joined the "Lovely Year of Finishes" hosted by Shanna at Fiber of All Sorts   and Melissa at Sew BitterSweet Designs . You can click on the image on the right side bar to check this out.  I hope this will keep me  on track :-).

I was (and still am) working on Easy Street but that has to be put on the back burner (just Part 8 to do) because I have to make the new Block of the Month sample for the LQS that I am the coordinator at. I have almost everything cut and ready to sew together. Tomorrow I will cut the last 4 blocks and start to assemble. After that I can continue with Easy Street.

I also have the first client quilt of the year quilted. Pics to follow later. 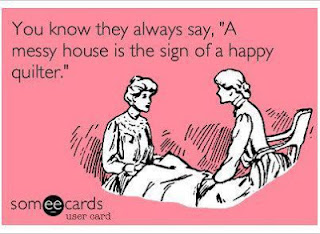