I don't know where time is going. Sitting here today I suddenly remembered today is December 7th. A day that will live in infamy. For me that is two reasons. First is the attack on Pearl Harbor. The second is that on this day in 2010 I went under the knife for breast cancer. I want to thank my friend Vickie for sitting with my husband at the hospital all day while I was in surgery. I know it helped him get through it. It has been 3 years and everything is going really good. All reports are fine.

I am also trying to work on Bonnie Hunter's Celtic Solstice Mystery. I have Part 1 cut for the smaller quilt (still need to cut for the King size). I still had a class sample to finish up before really working on the mystery. Now I have Part 2 to catch up on.

I also went the day after Thanksgiving to  a friends house for a little quit retreat (there were 5 of us). I did manage to get a few things accomplished there. I got a small wall hanging (for a class sample) done, a quilt top called "Grafitti" (also a class sample) done, a BQ4 top done, a five yard quilt top done, and a quilt top I'm making for DH for the hot rod he's building. I did take some pics of these and will post when I download them from the iPad.

This last week I also managed to pick up a couple of Featherweights. One of them, the paint is chipped up so I'm going to send it of to be painted. The other one is in pretty good shape (it's a 1941) but the box is toast. It has that special odor that is sooo hard to get rid of also.

Well that's my doings for this month so far. I'll try to post pics in the next post. 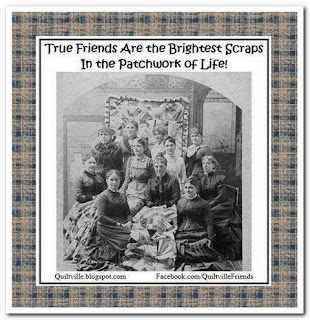