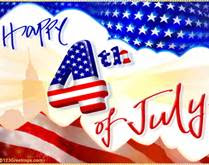 First of all I want to wish everyone a Happy 4th of July. I hope everyone has a safe and wonderful 4th.

Now for my progress report on what I have accomplished this week so far. Sunday I returned home from retreat. Monday was an all day at Gee Gee's (LQS) for BOM. Tuesday I had errands to run (deliver Reach for a Cure Totes, Safeway, Harbor Freight, JoAnn's, etc.). Wednesday, it was finally finish unloading the van and putting stuff away (from retreat). Then I decided that the Quest for a Cure top I had started on needed to get the borders on, so that is now a flimsy. I also pieced a back for it and cut and prepared the binding. Then on to cutting and piecing the sample for the "From Marti & Me" Club that will be starting up at Gee Gee's after the Farmers Wife Club is finished. After that I decided to get that last block from the paint chip challenge done. I had pre-cut and taken this to retreat and when I pieced it I was (2) 2' x 6 1/2" pieces short. Then on to load  client quilt.

That's about it up to now. Today is sort of laid back. DH and I will be going to a friend's tonight for visiting, food and fireworks.

Posted by Tosty's Quilting Tidbits at 8:49 AM